The major activity is that of ploughing, where the two farmers direct their ploughs towards each other. Here, the farmer stands erect and he seems youthful. Behind him is a naked youth who spreads the seed into the furrows. 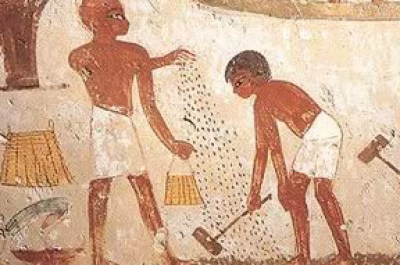 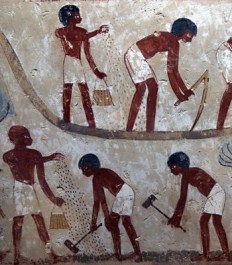 To the left, two men pound the ground with mallets, while another scatters seeds. The ploughman on the right is bent over his plough and looks quite old, with his grey hair and half bald head.

The scene is divided into three parts. In the right scene, the harvesters hold a sickle and harvest wheat. In the central scene, two men are trying to close the top of a container. At the left edge, two girls harvest flax. Notice the whiteness of their dresses, both fairly close fitting. Winnowing scene: the workers toss the grain into the air using scoops to remove the chaff. Two men gather and measure the grain, and an official watches over them.

Author unknown, The tomb of Nakht and his wife Tawy , THE TRANSVERSE CHAMBER - East Wall

This entry was posted in Africa, North Africa. Bookmark the permalink.